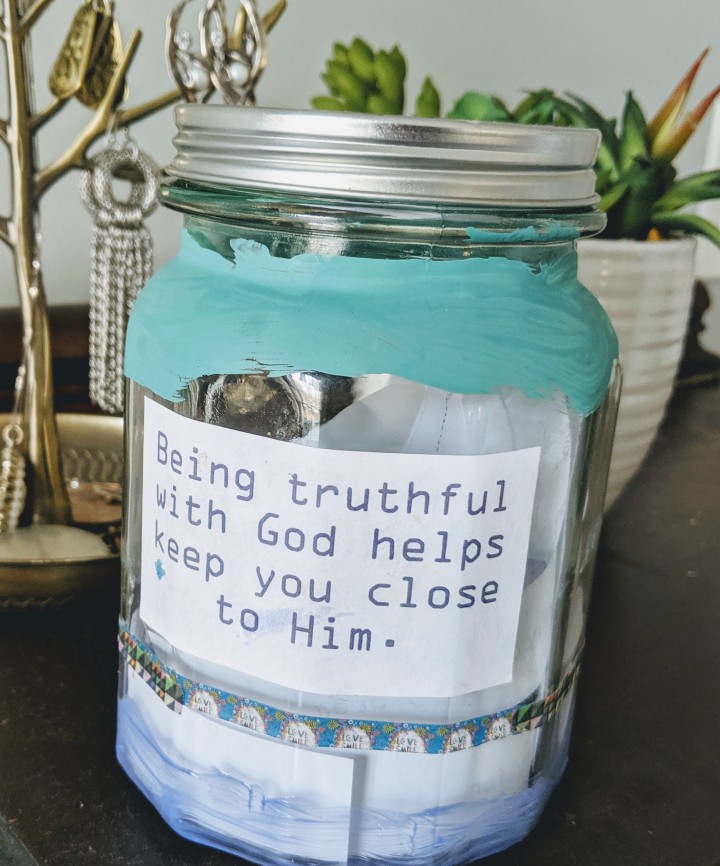 My daughter made and presented this jar to me after church one Sunday. She demanded that I immediately take out one of the questions she had placed inside and answer it out loud for her. I laughed, “These are personal questions that you can talk to God about”. Her face deflated and she declared, “But I don’t want to talk to God”.

Truth is, it is HARD to be truthful with God…partly because we don’t even talk truth to ourselves. We convince ourselves that our stomachache is from heartburn, when the truth is that we REALLY overate at Thanksgiving dinner. We lie to ourselves about how we spend our time, what we spend our money on, and what we really believe. We lie about whether we cheated in a relationship or on our taxes or talked negatively about a good friend to another. If the stakes are high enough, we lie. We even lie about whether we lie!

It is hard to be honest with ourselves and each other, but honest with God? That can be even harder because we know that God is perfect and in the Old Testament, He comes across as a bit judgmental! Anything we say could be used against us in a court of law! At least that is how it feels. Get your Bible out and put your hand on it. Promise to tell the whole truth and only the truth.

The truth is that so many of us get freaked out when we want to pray because we think that God is up there with a gavel just waiting to hand out His next verdict. Truth is that He already decided the verdict about you. He deliberated about your past, your lies, your drama, your inability to see past your own nose, your dislike of everyone different from you, your desire to overeat, overindulge, and over-evaluate everyone. And He found you……

NOT guilty. (More on that in a sec)

There was a woman back in the 1st century who had a bleeding problem for years. YEARS! 12 of them in fact! She was part of the Jewish culture that Jesus was born into and because of this culture, she was considered unclean. She would not have been in close relationships with anyone considered worthy or upstanding in their society. She would never have anyone or be anyone in that culture.

She had heard about Jesus and how he healed people so she came to where a crowd was around Him. She said to herself that if she could just reach out and touch the hem on his clothing, he would heal her. So she reached out and he did heal her! She could feel the healing. But he could feel the power of the healing also! And then he did something terrifying.

He asked who had touched his clothes and the whole crowd stopped and waited for someone to speak up. She had been willing to reach out to him, but then he posed this question to the entire crowd! What could she do?Would she speak with him? Would she let him know what she was thinking and feeling? Would she trust him enough to let him get to know her?

He wanted more than just to heal her. He wanted a relationship with her. He wanted to hear from her mouth what she had done and why. And even though she was afraid, so afraid that she was shaking, she came and told Jesus the whole truth. She let him in on what was going on inside her mind and heart and body!

When she chose to answer Him with the whole truth despite her trembling and fear, He said to her, “Daughter, your faith has made you well; go in peace, and be healed of your disease.” When we do choose to tell Jesus our whole truth, He answers us with the same love and affirmation. We bring the diseases of our body and soul to Him and He listens and tells us that our faith has healed us and that we can go in peace.

Only Jesus can listen to that level of truthfulness and still call me “Healed”, because He is the only one who can call me “NOT GUILTY”.

A woman who had suffered a condition of hemorrhaging for twelve years—a long succession of physicians had treated her, and treated her badly, taking all her money and leaving her worse off than before—had heard about Jesus. She slipped in from behind and touched his robe. She was thinking to herself, “If I can put a finger on his robe, I can get well.” The moment she did it, the flow of blood dried up. She could feel the change and knew her plague was over and done with. At the same moment, Jesus felt energy discharging from him. He turned around to the crowd and asked, “Who touched my robe?” His disciples said, “What are you talking about? With this crowd pushing and jostling you, you’re asking, ‘Who touched me?’ Dozens have touched you!” But he went on asking, looking around to see who had done it. The woman, knowing what had happened, knowing she was the one, stepped up in fear and trembling, knelt before him, and gave him the whole story. Jesus said to her, “Daughter, you took a risk of faith, and now you’re healed and whole. Live well, live blessed! Be healed of your plague.”